Battle on the Beach: Cheering on Team Cyr with Coldwell Banker Fort McMurray 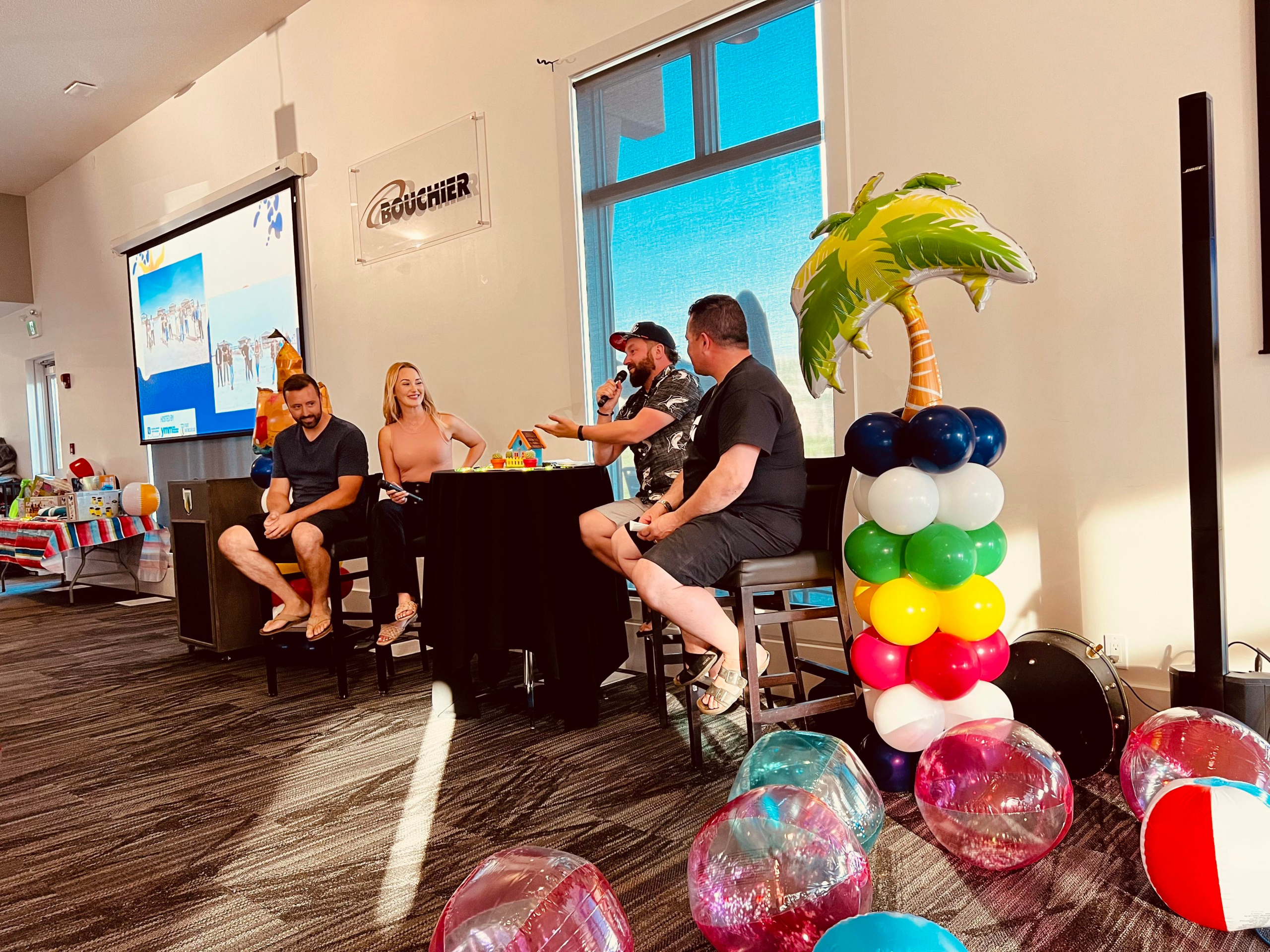 This past week, Team Balsom converged around the Fort McMurray Golf Club for the Season Premiere of HGTV’s Battle On the Beach. Over the years, we’ve done tons of events like concerts, galas, award shows and Indigenous cultural festivals- but never a reality TV viewing party. But when we found out our friends, local realtors Paige and Corey Cyr were going to be competing we knew we needed to celebrate. Colin Hartigan, owner/broker of Coldwell Banker and long time friend of the Cyr’s jumped on board immediately at the idea. A call was placed to the Fort McMurray Golf Club, and in less than three weeks the event was planned.

The premiere ended up landing on an insane weekend. All hands were on deck Friday for the Athabasca Tribal Council Annual Golf Classic Tournament. Balsom staff member Mike Jones had his own event Saturday, the successful Rock the Rails skateboard and music festival, and fellow staffer Jenna Hamilton celebrated her Bachelorette party. Almost all of the team were helping Mike or celebrating with Jenna, so Sunday evening’s event had to be executed quickly.

The day started with a local shopping trip for team founder Krista Balsom and her mom Pauline to stock up on some fun beach decorations and prizing. The next several hours were spent painting “beach houses”, testing out sound and writing scripts. With the whole team on site, and Jenna working from home running social media – the doors were opened at 5:00 p.m. as friends and clients rolled in, as well as members of the local media. Appetizers were provided by the culinary team at the Fort McMurray Golf Club led by Nate Catto and local legend Dan Tulk entertained the crowd with live music.

The guests of honour, Paige and Corey arrived at 5:30 with Paige admitting she was “super nervous” about how the show would edit them. After being contacted by an HGTV producer via Instagram (which they initially thought was a joke or a scam), the two secretly flew to Galveston, Texas for five weeks to film the show. Only a handful of people knew, including Hartigan and fellow realtor Alyssa Thomson, who had to help cover for the team’s clients. (DOGS)

There’s just one problem, Paige (and Corey to a lesser extent) is very active on social media. So how would she cover for being on the show? Simple. They would tell their fans they were on a secret trip and try to get people to guess what they were doing and where they were. Secret medical procedure? Lottery winners? Nobody guessed the correct answer – with lots of people guessing California, Hawaii, or Florida.

As show time approached, the room started to fill up with the younger audience members enjoying playing with the beach balls. The newest member of Balsom Media, Matt Lorenz brought his camera around to film the crowd’s reactions. As the episode rolled on, the audience laughed and critiqued along. “Pfft – who would choose that color scheme!”, was overheard when one of the rival teams made a questionable choice. Luckily for the nervous Paige, the team was well represented and even ended up winning the first episode which focuses on The Kitchen, winning themselves $3,000 cash!

After the show, Mike Jones and Colin Hartigan hosted a panel asking the two about the episode. The first question posed surrounded the weather. It was winter in Fort McMurray when the two headed to Texas, but it wasn’t much better there (okay, maybe a little). Jones observed that the Americans were wearing t-shirts with Paige in an oversized hoodie and Corey sporting a jacket in some scenes. The team also answered questions about what was left on the cutting room floor, and told several humorous anecdotes about their designated carpenter, Frank – who didn’t feature much in the first episode. Questions from the audience were taken as well about the show’s hosts, the other teams and the behind-the-scenes process of filming. Paige and Corey were on set for twelve hours a day, six days a week- mic’ed up almost the entire time with only an hour break for lunch.

As the panel drew to a close, focus shifted to episode two which will focus on the living room of the house. Having seen the preview, we know this will be the episode where we get to see Paige’s emotional moment. According to Paige, Corey was quite grumpy that morning and the two were butting heads. Eventually, Paige threw a water bottle off the balcony in a moment of anger and wondered if it would make the episode. We loved hearing their “real talk” about the experience and definitely can relate to some grumpy days and angry moments!

Battle on the Beach showcases three teams as they renovate identical beach-front properties with the guidance of their coaches Ty Pennington, Alison Victoria and Taniya Nayak. Fort McMurray’s own Paige and Corey are the only Canadian team in the show’s history and are coached by Alison Victoria of Windy City Rehab fame. The show’s reality competition is judged by Brian and Sarah Baumler of HGTV fame. Battle on the Beach can be watched on HGTV most Sunday evenings at 7:00 MST, and is also available to stream on discovery+.

We’re excited to keep watching their journey and thankful to Coldwell Banker Fort McMurray for the chance to share some excitement for Paige and Corey with the community.

Kerri kicked off her career with the CBC Edmonton {television} News, but transitioned into print media after her {now teenagers} were born. She uses social media to tell her story on the daily, and believes there is no such thing as kissing dogs too much. She laughs loudly, gets extraordinarily weird if she doesn’t eat on a regular schedule, and has a quiet fascination for marionettes, stemming from that one scene with the puppet goats in The Sound of Music. She fills her free time with her partner, plotting ways to have fun and find new adventures together, and she fills her professional hours crafting ways to connect people through creative storytelling and authentic communication.

Get to know all about Team Balsom, the work we do and the things we love, our amazing clients, inspiring community events and organizations and other gems of information we think you’ll be excited to hear all about.